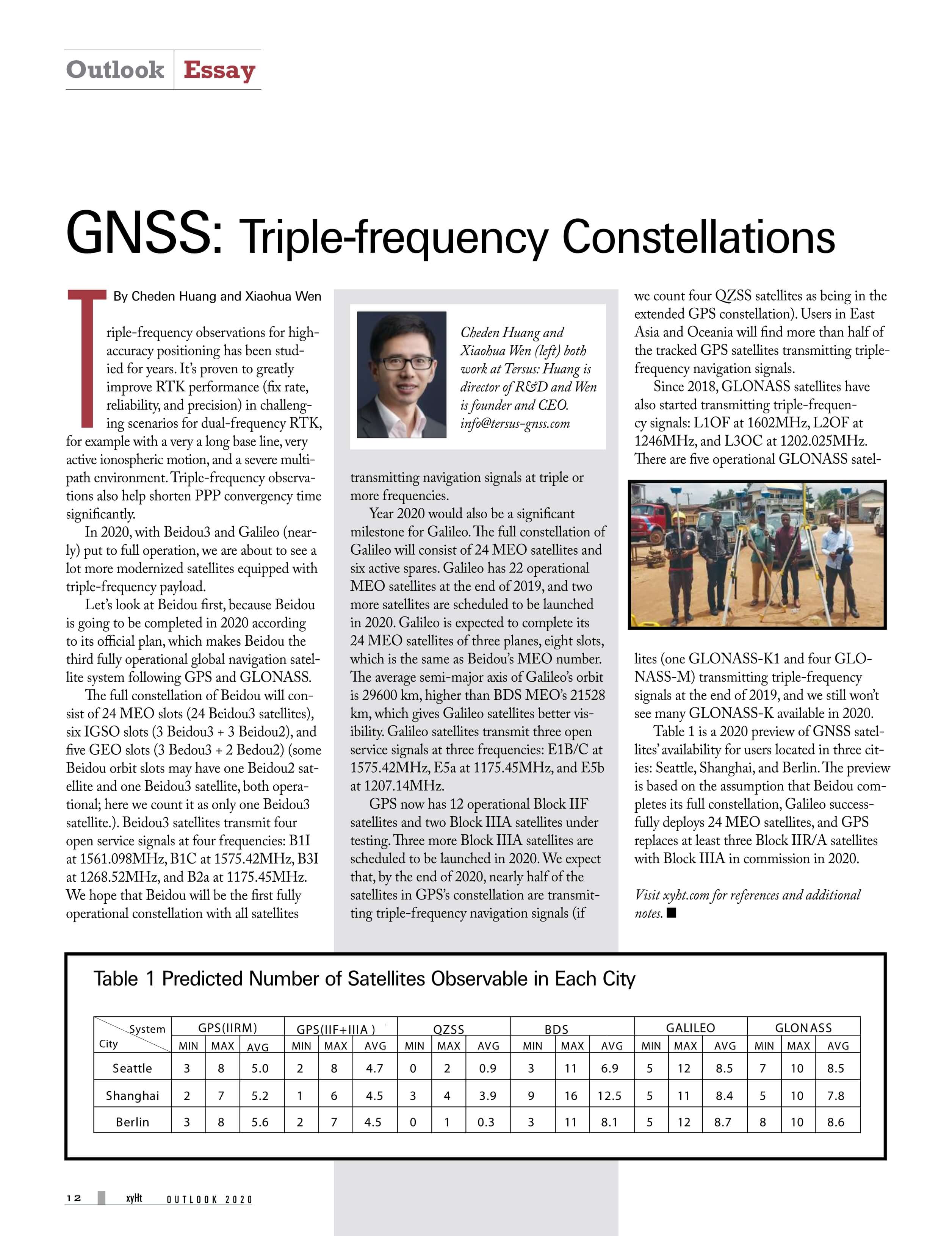 We will take a look at Beidou first, because Beidou is going to be completed in 2020 according to its official plan, which makes Beidou the third full operational global navigation satellite system following GPS and GLONASS. The full constellation of Beidou will consist of 24 MEO slots (24 Beidou3 satellites), 6 IGSO slots (3 Beidou3 + 3 Beidou2), 5 GEO slots (3 Bedou3 + 2 Bedou2) (note1). Beidou3 satellites transmit 4 open service signals at 4 frequencies, B1I at 1561.098MHz, B1C at 1575.42MHz, B3I at 1268.52MHz, B2a at 1175.45MHz. Beidou is hopefully to be the first full operational constellation with all satellites transmitting navigation signals at triple or more frequencies (note2).

Year 2020 would also be a significant milestone for Galileo. The full constellation of Galileo will consist of 24 MEO satellites and 6 active spares. Galileo has 22 operational MEO satellites to the end of 2019, and 2 more satellites is scheduled to be launched in 2020. Galileo is expected to complete its 24 MEO satellites of 3 planes * 8 slots, which is the same as Beidou’s MEO number. The average semi-major axis of Galileo orbit is 29600 km, higher than BDS MEO’s 21528 km, that gives Galileo satellites better visibility. Galileo satellites transmit 3 open service signals at 3 frequencies, E1B/C at 1575.42MHz, E5a at 1175.45MHz, E5b at 1207.14MHz (note3).

From 2018, GLONASS satellites also start transmitting triple frequencies signals, L1OF at 1602MHz, L2OF at 1246MHz, L3OC at 1202.025MHz. There are 5 operational GLONASS satellites (1 GLONASS-K1 and 4 GLONASS-M) transmitting triple frequencies signals at the end of 2019, we still won’t see many GLONASS-K available in 2020(note6).

Following is a 2020 preview of GNSS satellites availability for users located at 3 cities, Seattle, Shanghai and Berlin. The preview is based on the assumption that Beidou completes its full constellation, Galileo successfully deploy 24 MEO satellites, and GPS replaces at least 3 Block IIR/A satellites with Block IIIA in commission in 2020.

(1) A satellite is considered to be observed when its elevation is greater than 5 degree.

(2) The average satellite number is calculated for 24 hours and the step is an hour.

(3) https://www.navcen.uscg.gov/?Do=constellationStatus shows prn12, prn14 and prn18 will be replaced by a new sat.

(4) All Beidou’s GEO and IGSO satellites are located above from 76°E to 140°E, these satellites make Shanghai see much more Beidou’s satellites than Seattle and Berlin.

(5) The highest elevation of QZSS satellites is about 15 degrees in Seattle and is about 10 degree in Berlin.

(note3) According to “Galileo E6-B/C Codes Technical Note”, Galileo E6-B (at 1278.75MHz) would be open service signal, but it has a 1000Hz symbol rate modulated on, which makes it not ideal for ranging purpose. Galileo E6-C (also at 1278.75MHz, the pilot component), may be encrypted in the future.

Tersus is a leading GNSS RTK solution provider. Our engineers have been pioneers in the design of GNSS products to support high-precision positioning applications.

Our products include GNSS RTK & PPK OEM boards and receivers, as well as integrated solutions such as the David GNSS Receiver, Oscar GNSS Receiver, MatrixRTK, and GNSS-aided Inertial Navigation System.